The Røst archipelago is famous for its dried cod and large seabird colonies. Back in the late 1970s, it was the summer residence of 1.5 million pairs of breeding puffins. Today more than three quarters are gone. Tycho Anker-Nilssen has dedicated his career to solving the mysterious death of these bird cliffs.

He arrives in spring. Rather, he is a sign of spring, as reliable as the migrating seabirds he studies. When he arrives in the first week of May, dropping by the local store to take in supplies and catching up on the latest news, the islanders of Røst know that puffin season has begun.

With its extreme location and distinctive topography, Røst is a hotspot for birdwatching. Here you find one of the world’s largest breeding colonies of Atlantic puffin (Fratercula arctica) spread across 17 of the allegedly 365 islands in this offshore municipality. The birds spend winter out at sea, and return to the colony in April.

Shortly after they are joined by Tycho Anker-Nilssen, senior research scientist at the Norwegian Institute for Nature Research, who monitors their numbers and breeding performance. Gaps in the data series would be detrimental, so the fieldwork at Hernyken has been one of his main priorities. Over the past 37 years, he hasn’t missed a single summer.

He hasn’t missed much else either, for that matter. Being married and having two teenagers from the second clutch – in addition to a now 30-year-old son from the first – indicate he still leads a rich social life. On top of that, he has published hundreds of scientific papers and reports, a great achievement in its own right. However, unlike many scientists, he didn’t stop there. Driven by curiosity he has played a crucial role in advancing seabird research and conservation both in Norway and internationally. To put it succinctly, he has been a major force in telling people why seabirds are relevant.

“Norwegian seabird research isn’t just a gloomy report of seabirds facing extinction, but also a long tale of the dedicated people who work tirelessly to reveal the underlying reasons, and continue the quest to find out how we can reverse the negative trends. I’m proud to be part of this tradition, and to pass on the story.”

Practically raised with a bird in his hand, Tycho marked out his course early. His father would scatter tons of sunflower seeds to feed overwintering birds. Childhood summers were all about catching the largest fish and collecting feathers and birds’ eggs in the neighbourhood woods – until the boys realised what a crime they had committed.

“We really saw no reason for any serious concern for nature. The prevailing idea at the time was that nature was a pantry, and the oceans contained an inexhaustible supply. When televisions became ubiquitous, and the news anchors reported on the collapse of the Atlantic herring our perception changed.”

Instead of stealing eggs, the awakening environmentalist chose to study the natural sciences and set out to save the birds.

At the University of Oslo, he became one of those eternal students so typical of that time, the ones some thought would never make anything of their lives. But Tycho, curious by nature and a dedicated collector (of bird ringing statistics, of ecological insight, of single malt whisky – to mention a few) also collected valuable experience whenever he added another item to his collections. Collecting makes him tick.

During his biology studies, he spent 565 days ringing birds and investigating box-nesting great tits at an inland field station just outside of Oslo. In those years, he also co-managed the Oslo Bird Ringing Centre together with a group of friends. After all, someone had to do it and being students in the 1970s, they had the opportunity.

When Tycho first set foot on Røst in 1981, his predecessors had already been collecting data there for two decades. They had initiated what is now one of the longest and most comprehensive seabird time-series ever compiled, and it is fair to say that the field station on the remote island of Hernyken is where Norwegian seabird research earned its wings.

In the early days, devoted individuals drove the research forward, although lacking a long-term plan. Svein Myrberget, one of the pioneers, initiated the puffin studies when he moved his research to Røst in 1964. On Hernyken, the puffins nest in burrows on grassy slopes, which makes them easier to study than on the rocky island of Lovunden.

With Gunnar Lid, who succeeded Myrberget in 1970, the research took on a more organised character. By the end of the decade, the first national seabird project was launched with funding from the Norwegian Directorate for Wildlife and Freshwater Fish. When Lid tragically drowned during fieldwork in 1983, Tycho was his natural successor to carry the project forward.

Over the years to come, Tycho and his colleagues proved a close relationship between food and chick mortality, and the herring’s role became apparent.

“The continued decline in populations of puffins and several other cliff-breeding species had been a concern since the monitoring started, but we knew little about the underlying mechanisms. As we added years and data to the time series, alongside various shorter-term research projects, we were able to add missing pieces to this puzzle.”

On their first trip in early May, Tycho and his crew start collecting data and monitor the size of the breeding population. One month later, they return to follow the outcome of breeding in several hundred nests, ringing adult birds, and collecting food samples. August marks the end of the season when they return for one last stint of fieldwork, ringing chicks before they fledge. In addition, the research team monitors a whole range of other species and track the movements of some birds using miniature data loggers. Collecting new knowledge makes fieldwork an exciting experience, week after week, year after year. Decades go by, but new and unexpected things turn up all the time.

“We don’t do this just to understand what’s happening on Røst, but to reveal some of the major mechanisms in the interaction between important components of the marine environment along the Norwegian coast. The more we learn, the better we understand our observations and which questions it is important to answer at any given time. Continuing the seabird research and monitoring on Røst for the benefit of present and future society isn’t just laborious work. It’s a professionally challenging and exciting task.”

But life at the field station isn’t all about work. Living close together for weeks in a small damp cabin, often under harsh weather conditions, challenges people’s social skills and doesn’t suit everyone. For those who fit in, however, fieldwork adds new dimensions to their personalities. Long-lasting friendships, creative cooking skills and handiness are but a few of the many side effects of field life.

The never-ending quest for knowledge

Acknowledged for his work, and an important voice in both local and international forums, people listen when Tycho talks – and believe me, he likes to talk. However, people listening hasn’t always been a matter of course.

“That benefit follows age I guess. Breaking through established opinions and bringing new research to the table can be quite a challenge. Take SEAPOP for instance; it took us seven years just to get the programme started.”

SEAPOP, a programme for long-term monitoring and mapping of Norwegian seabirds, provides and maintains baseline knowledge about seabirds for an improved management of the marine environment. When the programme was established in 2005, it was a milestone for mapping and monitoring seabirds in Norway, and owes much to Tycho’s commitment and persistence.

One of his strengths is his ability to translate new knowledge into practical management – making research relevant to society. He has contributed to making seabird research an important information source for nature management, and brought the issues into the public debate. At the same time, his own research has helped improve our general understanding of seabird ecology.

In order to predict the future, we must also understand the past. In retrospect, the continuity of the puffin study at Røst has helped advance our knowledge about pelagic seabirds by leaps and bounds, especially when the results are analysed in broader contexts.

“This can only be achieved with a multi-disciplinary approach and an extensive cooperation with colleagues across the borders of seas and oceans. New challenges continue to appear and there are still more questions than answers, but our insight into many important issues such as the relative importance of fisheries and climate change has increased substantially.”

Seabirds are good indicators of the health of marine ecosystems, not only because of their visibility, colonial breeding and ease of study, but also because they respond early to important changes in the marine environment. This is particularly true for long-lived, fish-eating specialists, which are constantly forced to balance their investment in reproduction against their own chances of survival. Continuing these time series is therefore crucial.

Ecosystems present a complex picture, with delicate balances and cycles. Competition, climate, predators and prey – everything interacts in determining whether a species will thrive or struggle for survival. Seabirds have long generation times, and can live for decades. According to Tycho, a research career is far too short a timespan to uncover the full functioning of these ecosystems, but a career like Tycho’s definitely propels us a long way towards understanding and ultimately saving some of them – like the puffin.

Tycho Anker-Nilssen photographed in the summer of 1975 (above). This primitive cabin served as bedroom, kitchen and working space for the scientists for 45 years. 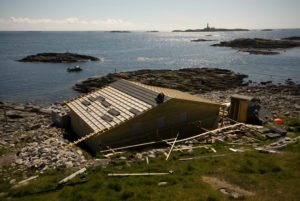 In 2009 it was finally replaced by a modern, fully isolated cabin. Building only in their spare time, the field team needed six summers to complete it, learning as they went and getting better as do-it-yourselfers with each season. Photo: Tor Kvam (75) and Tycho Anker-Nilssen.

This article is produced for the magazine Fram Forum 2018.

Fram Forum is published once a year and aim to inform the general public about the wide range of activities that take place within the Fram Centre.

23.02.21 / framsenteret.no -Larger areas of ocean in the Arctic must be protected