The underside of sea ice holds a labyrinth of interior channels and pockets that provide safe places for the eggs and larvae of seafloor animals, zooplankton, and potentially eggs and juveniles of polar cod. In this “kindergarten”, they can hatch, feed, and grow without worrying about the threat of predators. But the sea ice is itself is threatened by global warming. To foresee the consequences of future sea ice loss, more knowledge is needed on this understudied component of Arctic ecosystems.

Sympagic biology (=sea ice biology) was first discovered in the nineteenth century. The first ice algae were described in 1841, and Fridtjof Nansen, originally a zoologist, described the first single-celled animal (=protozoan) in 1906, based on material from the famous Fram expedition (1893-1896). Today more than 1200 microalgae and single-celled animals have been identified from sea ice, the most important being sea-ice diatoms (single-celled algae with glassy cell walls of silica). In comparison, the many multi-celled animals that live in sea ice are severely understudied. Collectively called “sympagic meiofauna”, these creatures are slightly larger (0.02 to 0.5 mm), yet only a few have been identified: 4-5 nematodes (roundworms), one polychaete (bristle worm), one jellyfish and a few copepods (zooplankton), flatworms and rotifers (wheel animals). Reasons for this are primarily the difficulties of identifying these tiny specimens due to lack of specific morphological features and DNA reference sequences.

Ice algae and sympagic meiofauna live inside the labyrinth of brine channels in the sea ice, which are formed when salt is rejected as seawater freezes. Ice algae are capable of growing in dim light and can bloom up to two months before the onset of the phytoplankton bloom in the water column. Sea ice algae are therefore an important early food source for many marine invertebrates, helping to kick off early reproduction, thus ensuring a longer season for growth and development.

The hotspot for life in sea ice is its bottom part, only a few centimetres thick, which is regularly flushed by seawater, providing nutrients for algal growth. This environment is more similar to seawater and not as extreme as in the brine channels further up in the sea ice, where space is more limited and the brine is far too salty for any organisms to survive there.

Sea ice can be looked upon as an upside-down seafloor. Particularly coastal ice formed over shallow depths can have high abundances of sympagic meiofauna – up to 400 000 individuals per square metre. Coastal sea ice is dominated by larvae of seafloor animals. The term larvae refers to early life forms that look very different from the adult forms. Pack ice overlying the deep Arctic Ocean mainly contains eggs and larvae of zooplankton, and at much lower abundances. The most conspicuous ice fauna in the Arctic Ocean are the large ice amphipods (up to 6 cm long) that crawl around on the bottom of sea ice and the many medium-sized structures formed by pressure ridges. In level fjord ice, ice amphipods are absent, unless they have arrived there by “hitch-hiking” with drifting pack ice.

In 2015, the first specimen of the sea-ice jellyfish Sympagohydra tuuli was found in Svalbard by students at UNIS, the University Centre in Svalbard (see Further reading). Since then, UNIS, in cooperation with UiT and the Norwegian Polar Institute (NPI), has expanded the research on sympagic meiofauna to include eastern Svalbard. NPI has a small field station in Inglefieldbukta at Storfjorden in eastern Spitsbergen. There, the Institute has monitored the physical properties of sea ice and snow cover since 2006. In 2017, UNIS joined NPI’s annual survey to add a sea-ice biology component to this unique time series. Since then, UNIS and NPI, together with master’s and PhD students enrolled at UiT and the University of Bergen, have conducted several field campaigns to Inglefieldbukta and nearby locations.

Exciting new findings from eastern Svalbard include the observation of the ice diatom Melosira arctica, which is primarily associated with multiyear sea ice. The biodiversity of the sympagic fauna in western and eastern Svalbard were found to be similar. Interestingly, molecular analyses revealed two previously unknown sea ice polychaete species belonging to the family Spionidae, at least one of which belongs to the genus Spio. From earlier studies, only juveniles of the polychaete Scolelepis squamata were known to reside within sea ice, but this species has so far not been discovered among the many polychaete larvae found in Svalbard (up to 18 000 larvae per square metre sea ice).

Roundworms of the phylum Nematoda dominate the sympagic meiofauna community in Svalbard. Interestingly, we find all stages – adults, eggs and larvae – inside the sea ice, with adults appearing at the time when sea ice forms. When the light returns after the polar night and ice algae start growing in the ice, nematodes produce their eggs. These eggs appear in clusters: several microscopic eggs are found together in a transparent sack. As spring progresses and the eggs “mature”, small larvae start to form inside the eggs and they subsequently hatch. Based on what we have observed in our sea ice samples, the hatching takes place when food is plentiful for the “baby” nematodes. This well-timed reproduction ensures that young nematodes can gather enough energy to grow and mature before the ice melts. We do not know what happens to them after the ice melts in summer, but we suspect that they return to the seafloor to finalize their development into adults.

Since there is no year-round sea ice in Svalbard, we assume that none of the specimens we find in coastal sea ice depends 100% on the sea ice to fulfil their life cycle. If the same species appears in coastal sea ice in Svalbard and in the drifting pack ice in the Barents Sea and the Arctic Ocean, we can assume that this species spends part of its life cycle in the water column or the seafloor habitat. This is useful information for scientists, as it suggests that the species may not reach a “dead end” when the summer sea ice disappears. Whether these species will enjoy equal reproductive success without the “sea-ice kindergarten” remains unknown.

The timing of the ice algal bloom and the seasonal peak in sympagic meiofauna abundance is challenging to predict and, thus, to sample. In Svalbard, it can happen any time during April – and sometimes as late as mid-May if snow on the ice blocks out the sunlight. For April 2021, an intensive sampling campaign is planned in addition to our regular sea-ice surveys.

To study the development of this unique sea-ice community, we will sample ice cores every two or three days from the beginning of April to mid-May. To do this in a cost-efficient way with a minimal environmental “footprint”, we will be assisted by two women overwintering in a trapper’s cabin on the shore of Van Keulenfjorden in western Svalbard, 80 km south of Longyearbyen.

These women (see https://www.heartsintheice.com/) have a strong environmental commitment and serve as citizen scientists during their two-year stay in the cabin named “Bamsebu” (Bear’s den). This is the second year they help collect sea-ice samples for research.

When they discover the brownish colouration at the bottom of the sea ice that signals the beginning of the annual bloom, a team of UNIS scientists and students will visit to conduct a thorough investigation of sea-ice biodiversity and productivity during the short, intense peak-production period.

This work is funded by the Fram Centre (Sea ice in the Arctic Ocean, technology and agreements) FADE; 2019-2021) and the 2017-2018 Belmont Forum and BiodivERsA joint call for research proposals, under the BioDivScen ERA-Net COFUND programme (ACCES; 2018-2022). 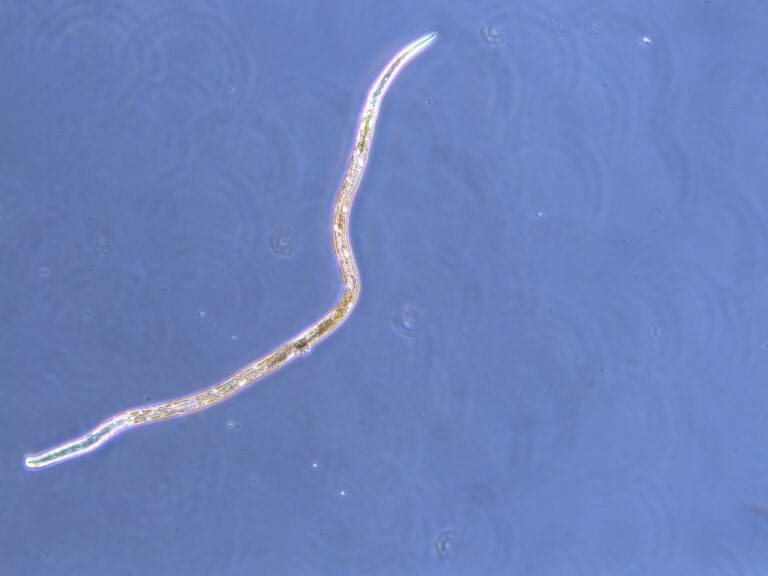 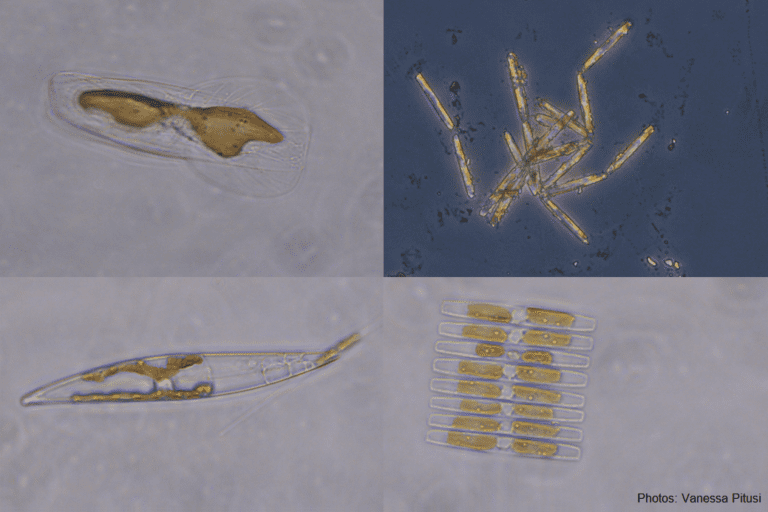 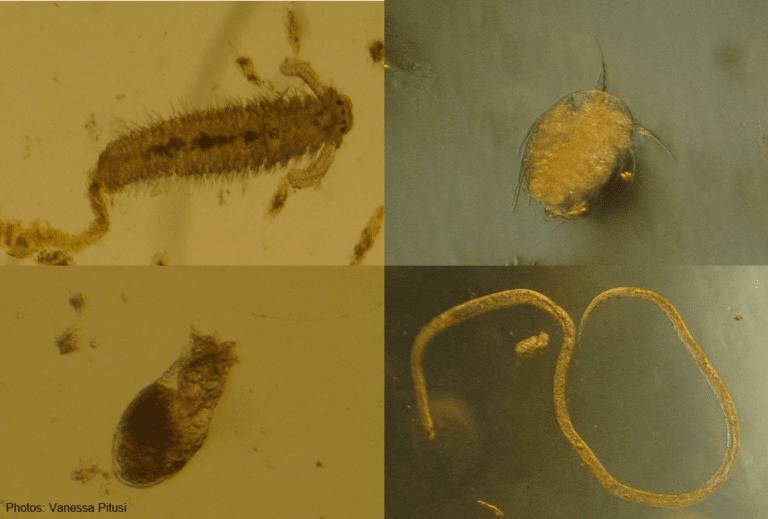